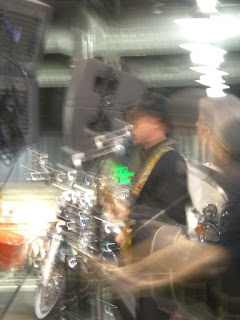 Performed with The Blaggards at a private event for the Long Island Music Hall of Fame last night at Light House Harley Davidson (Huntington NY), at the invitation of LIMHOF board member Joe Rock. Joe set us up with a great PA, was gracious and even scored us some extra AC power drops even though he was being pulled in seven directions at once. Some great bikes were on display as part of the "Music and Motorcycles" exhibit, which was there for several days. I liked the non-Harley Davidson bikes, especially the ones with the boss daddy cool retro-logos. The Blaggards turned in two great sets, spotted Gary U.S. Bonds (who actually looked so young that we didn't recognize him immediately) and got to meet Bill from Paradiddle Records. The Blaggards are talking about some projects with Bill, that's all we'll say at this point...
In other news... first it was former Hangdogs lead singer Matthew Grimm who migrated from Brooklyn back to his home turf of Iowa City to launch his new band The Red Smear, then it was Star City singer Jason Lewis who did the same, enrolling in Iowa City University's Writer's Workshop... now there's word of the Damnwells lead singer Alex Dezen following suit. With Jason Lewis joining the Red Smear on stage at some local gigs, can some sort of supergroup teaming-up be too far off? Oh, to play bass in THAT act...

Getting ready to kick off shooting of a film for the "Bridget" single...
Posted by Mick Hargreaves at 1:29 AM