By The Way... gossip and tidbits 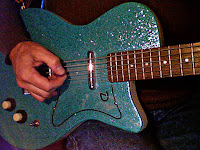 Grey skies and drizzling in the awakening woods of Eastern LI NY:
The downloadable March 15 2009 Ryan Adams Concert (Nashville TN) features "Joke Time with Jon Graboff" - a couple of funny zingers from the pedal steel player...
If you're on Long Island NY this week, don't miss the Hideaways (with their bandleader playing guitar AND organ seemingly at the some time) at Bobbique, Patchogue on April 22nd. Word has it that Chris Ripley (The Lone Sharks) will be filling in behind the kit, as the Hideaways are seeking a permanent drummer, so there's a whole 'nother reason to attend...

The Blaggards are submitting a song for Paradiddle Records upcoming Kinks tribute... Reportedly, Caroline Doctorow, and the Lone Sharks will do the same.

This week, I head south, playing bass with Caroline Doctorow who does the Blue Plate Special (Knoxville TN) and Norm's River Road House ( Nashville TN), both on April 16th. I'm at the Living Room back in NYC on April 23rd, playing bass for Libby Johnson.