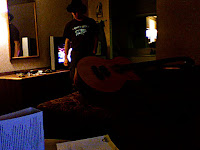 Outside of one hand-written sign on an overpass outside of Riverhead NY, we didn't see evidence of one "Tea-Bagging" party on the way down here along I-78 and then I-81 from Long Island NY. So, first impressions and all, it does indeed seem to be an "Astroturf" (as in, no real grass roots) non-event.

I'm playing bass for Caroline Doctorow (supporting her "Another Country: The Songs of Richard and Mimi Fariña" CD) Thursday 4/16, first here in Knoxville on the "Blue Plate Special" WDVX radio program at noon, then over in Nashville at 7pm at Norm's River Road House. For both shows, fiddler Barbara Lamb is also in the house - can't wait to meet her. The rock-solid Andrew Carilllo (Joan Osborne) is manning the guitar and electric sitar.

For us New Yorkers, gas is cheap here (we're used to $2.25 in the land of Little Edie's "Grey Gardens"), and we almost missed the fact that there's an hour time difference between Knox- and Nash- villes.

Mental note: Convince the band to stop for eats in Abington VA on the way back in order to try to say howdy to the wonderful Dixie Bee Liners...