Does your vintage Fender Bass Suffer From "Fenderitis"?

We had just finished a great recording session today with Caroline Doctorow when fiddler extraordinare Gary Oleyar sighted down the neck of my 1966 Fender P-Bass (which only leaves the house for recording sessions) and said,

"Oh man, this thing has FENDERITIS."

Gary was about to provide a solution to something that had been bothering me for some time about my  P-Bass. Apparently, over time, the neck to a vintage Fender P-Bass (and probably some other basses, for that matter) will pull sideways to the G-string side, pivoting at the bolt-on screws... down, towards the floor as you wear the instrument. (Believe it or don't, kids, there's actually more tension on the G-string side of the neck, compared to the E-string side.) This results in the G being too close to the edge of the neck, and the E being too far away. The further up the neck, the more visibly pronounced this mis-alignment will be. Here's how the bass looked when Gary eyeballed it: 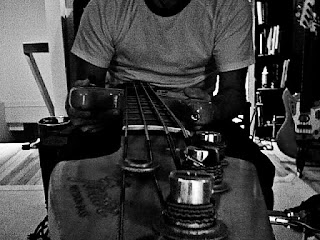 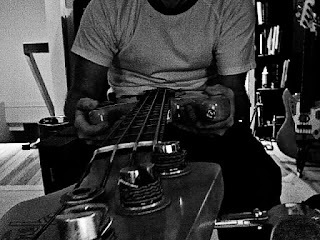 BEFORE: Too much space between E string and neck edge

Gary suggested slightly loosening the four screws that hold the neck to the body (of course, you would slacken the strings first) to permit re-alignment of the neck. Don't over-do it: Only 1 to 1.5 turns of the screws at the most should be necessary.  By pushing the neck UP, in the direction of the E-String, while tightening back the screws and simultaneously tensioning the strings JUST enough (start with the E to pull the neck in that direction) to see how far to push the neck over, I was able to get an ideal symmetrical re-alignment. Side benefit... I think the action is slightly better. Ha! 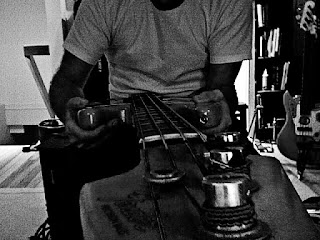 AFTER: More space between G string and neck edge 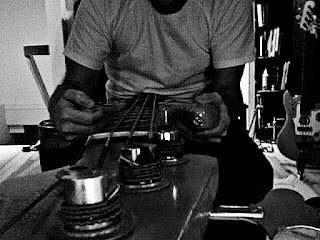 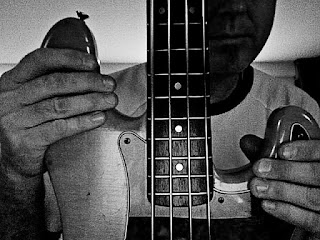 Posted by Mick Hargreaves at 11:29 PM