This photo details the mobile recording rig here at Lantern Sound. Nothing fancy - built to work reliably with no nonsense. An earlier post shows the roadcase. The Songtrails Radio Hour on WPKN (hosted by Caroline Doctorow & myself) have been using this rig, as have Matty Liot & The Big Up (Skip English producing), overdubbing at a band house after cutting basic tracks at the Think Tank, Hoboken NJ. 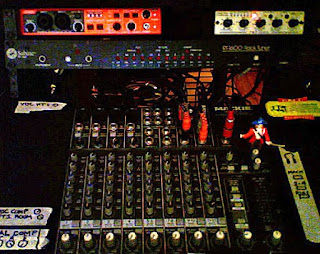 In the upper left (red) is a Roland/Edirol FA-101. It has ten channels of A/D I/O, two mic preamps, receives the main output from the Mackie console, and gets Fire-Wired to an outboard computer running recording software/format of choice. Living inside the rig is an additional LaCie 1TB hard drive, partitioned into seperate workspace and backup drives.

In the upper right (white) is an RNC1773 stereo compressor from FMC Audio. The "RNC" stands for Really Nice Compressor - this piece came recommended, and is a lot of bang for the buck. Three of these will fit in one rack space, yielding six channels (three linked pair) of compression for a total cost of around $550 US. This is often used for radio show announcer mics, and for in mono (left) mode for vocal overdubs.

The Mackie 1202 VLZ Pro mixer in the rack is used to manage inputs for the radio show: Two announcer mics, two CD players, and any other sources. The four mic preamps on the Mackie can be used independently of the console, and along with the two in the FA-101, make a total of six available simultaneously.

Ignore the Sabine rack tuner (wow, what a classic. Not.) It will leave as soon as a tube device (probably a single-channel mic pre/compressor) is purchased. The lower rack portion of the rig (not pictured) has Furman power distribution and houses a stereo power amp used to push Auratone-type recording monitors. One empty rack space is available for another device.

The figure immediately above the monitor section on the mixer is the mobile rig operations manager, "Salty Bill".  Don't be late to the session.

Posted by Mick Hargreaves at 7:20 PM