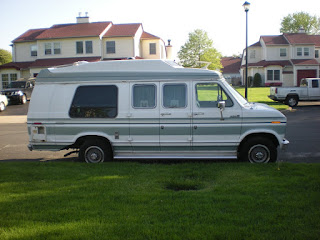 ... By Getting Out of Town In The Gas-Guzzling Ford Econoline "Tour Van"
AN EXERCISE IN NUTTINESS.
It seemed like it would be a simple weekend. One Saturday night solo acoustic gig to do, at the Cave Mountain Brewery, in the Catskills, right in the town of Windham, where I also work as a snowboard instructor at Windham Mountain, plus a Sunday rehearsal with Matty Liot & The Big Up in Hoboken on the way back. I could leave Long Island on Friday, spend an overnight at a friend's house near Suffern on the way north, and be at work on the mountain Saturday morning. Get paid to snowboard during the day, then get paid to play some music in a bar/brewery that night. What's not to like?

However, things started to get interesting on Thursday, when my 1996 Jeep Cherokee started making a loud ticking noise coming from the distributor. Turned out it was a worn distributor shaft bearing. Not terminal, but it certainly meant the Cherokee wasn't going to make the trip. Instead, I'd take the 21 foot long Ford Econoline Conversion "Tour Van", a family vehicle that is currently for sale. The fuel cost of my trip instantly doubled, if not more.

Then Friday morning the phone rang at 8:30 AM - I was needed to do some bass and backup vocals at a noontime recording session over at Caroline Doctorow's, where Pete Kennedy is producing sessions for her new record. No biggie - it was on the way west from my location anyway. I could squeeze it in easily.

So now, it's Friday morning, and here's what I'm loading into the tour van: All my snowboarding gear, my acoustic bass, my acoustic guitar, my suitcase with pedal board and cables, etc., a suitcase with merch, a backpack loaded with clothes, my laptop, an electric bass to play at rehearsal Sunday, and not one but TWO Fender Acoustasonic Jr. DSP combo amps... one that I bought new from the store two nights before, and the one I bought from Pete Kennedy a day after that, when I found out he wanted to unload his, which was in mint condition, for less than the price of the new one, which I'd return to the store that evening on my way up north. They had a 30 day "no questions asked" return policy there.

Now the phone rings again. It's some guy responding to my Craigslist advert selling a new replacement Toyota Pickup Truck tailgate I've had laying around. He wants me to meet him in Queens and he'll buy the tailgate for cash. So now THAT goes on the truck, too, and I head to Caroline's recording session, which goes well. I'm out of there in good time. The weather's going to be turning nasty soon, but I take a late afternoon lunch break in Western Suffolk county, fill the front fuel tank of the van for 33 bucks, after which I head to the music store. They accept the return of the Fender Acoustasonic while I plug an American made Fender Telecaster into one of Fender's new "Retro" Champ 600 reissues. The price has been slashed to 150 bucks, it sounds OK, and for the price, it might be a good recording amp. OK, so it will probably need better tubes and a replacement speaker, but still worth it.. The floor model is the only one in the store, put the pot is noisy and buzzing. I order one and head back out onto the road.

By now the Craigslist guy is calling me non-stop. He really wants the tailgate, soon. I get to the BP station on the LIE near Grand Central Parkway, our designated meeting place. I make it visually clear to the NY cop parked in his squad car nearby that this is NOT a drug deal going down... by taking the tailgate out of the van in plain view. Sold.

I weave my way north through the NYC highways, getting on the Major Deegan to the Thruway, hit some major traffic, and get to Suffern around 9:30. After watching a movie, I pass out. At 6 AM, my phone alarm wakens me. I take a shower, get dressed and hit the road. First stop, rest area for gas. Thirty three more bucks in the tour van tank. Now it's raining pretty hard, but not too windy. As I head up the mountain, it turns to... not rain, but not snow. SNAIN. Some cars are in the ditch as I head up through the pass to Windham Mountain. It's not raining there, either. Awesome. I teach two lessons, one private, one group, and I'm soaked by the end of the day at 4pm. I change to my stage clothes, grab a beer with some instructors at the bar, and head over to the Cave Mountain Brewery for my gig. The weather is getting worse (or better, from a snowboarder's viewpoint), because it's now turned to all snow, albeit a heavy, wet snow.

The gig goes really great and is shockingly well-attended, considering the weather forecast, which, being all-rain, did not really make me optimistic that people would even be coming to town.. The club is happy, a bunch of snowboard instructors show up and stay until the end, the new Fender amp performed like a star. Success!

That is, until it came time to drive the Tour Van to my friend's house, where I was staying the night. WIth about 8 inches of new, icy, wet snow on the ground now, the van couldn't get up the hilly road and negotiate the last hundred yards to the house. I'd have to leave it parked on the road and deal with it in the morning. But first, "let's just make sure I'll be able to move it from where I leave it", and... oops, doesn't look like it's movable. It's totally ON the road, but the accumulated snow means it won't move. This thing weighs a lot, and the wheels are just spinning. Even pulling it out with an SUV and a tow rope doesn't work. Uh oh. Looks like another 6 AM wakeup and DIG OUT, in order to be in Hoboken by 11 AM for Matty Liot's rehearsal. Should have left the van in town, and ferried the guitars up to the house. Instead, we shlelp the guitars up the road from the van to the house, have a bite, and sleep.

Six AM, Sunday, the sun's coming up. I go out to the van. It's now surrounded by  about 8 inches of new snow, compounded by what the snowplows have added on top of that. Bad. I put my snowboard boots and pants on and start digging. It quickly becomes obvious that this method of removing the van from the roadside snow will take years. Instead, go back to the house, where I call AAA emergency roadside service and request a pull-out. Meanwhile we all realize that the clocks went ahead an hour the night before, and those at the house who work at the mountain are late getting to work, while now I'm definitely going to be late for rehearsal in Hoboken.

The wrecker gets there in decent time, which lets me get on the road quickly. Maybe I won't be THAT late... stop at a Thruway rest stop for gas. Another 33 bucks in the tour-tank. I'm doing good, time-wise, until.... I encounter the 5 mile, almost two hour traffic jam. Why? The Ramapo river is in flood stage, and has come up on to the NY State Thruway, which is down to one lane where the water has taken over! At least this lets me get on the phone to hear first hand about all the damage that has occurred out on Long Island from the storm.

I got to Hoboken two hours late for rehearsal, so our time slot at the studio was essentially gone, BUT, because I had the Fender Acoustasonic with me, we were able to rehearse in our drummer Chris Mehos' apartment, with Matty singing through the Fender. After that was done, the long drive out to Eastern Long Island, including ANOTHER 33 bucks in the tour-tank.

At least neither I, nor the tour van... didn't get hit by a falling tree.

An entire day of sleep followed.
Posted by Mick Hargreaves at 12:03 PM