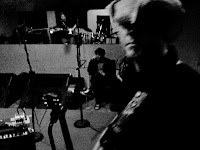 June 2010 finishes with a bang, July to be crazy in the best of ways. Thankful for the work...

Tues June 29 7pm, I'll be appearing "In The Round" at Long Island's premiere live music venue, The Stephen Talkhouse, in a series hosted by Nancy Atlas. I'm hearing it's a great night for music lovers, with a great blend of serious song trading and hilarious stories and wackiness. The following month, I'll be doing a similar show happening over at the Bay Street Theatre Songwriter Series in Sag Harbor Sun July 18.

See a full list of all shows, with everyone,  everywhere...

INSIDE INFO: Those who attended my solo show at The Local 269 Friday June 19th might be interested in Stephen Bailey's blog post, which explains how things sometimes work (or in this case don't work) "behind the scenes".

FOR A CHUCKLE, here's a snippet from vocal rehearsal the night before, with Gary Pig Gold, and my talented sister-singer Jen:

THE BLAGGARDS rocked the Rodeo Bar (and New York City) for the first time Sat June 26. Hot on the heels of the release of "Kinks Unkovered", the Kinks tribute CD released 6/22 on Paradiddle Records - the band honky-tonked and rocked... and rolled... deep into the night to an enthusiastic crowd. Tom, Steve, Rich and myself really look forward to returning there ASAP. Meanwhile, there's a new music video that accompanies The Blaggards contribution to the CD, "Last of the Steam Powered Trains".

CAROLINE DOCTOROW and THE STEAMROLLERS performed Fri June 25 at Arlo Guthrie's church (Great Barrington, MA), better known as "Where Alice Used to Live", now going by the name of The Guthrie Center. 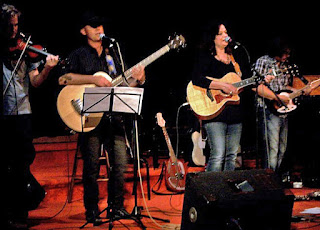 Gary, MH, Caroline, Andrew at The Guthrie Center
Caroline, with Andrew Carillo (Joan Osborne, guitar/sitar/mando guitar) Gary Oleyar (Loggins & Messina, fiddle/vocals) and myself (bass/duet vocals) performed "The Songs Of Richard and Mimi Fariña" to a full house. Lots of great vibes, nice people and good food. The dressing room is directly under the steeple (please resist the urge to pull on that big think rope connected to the bell), and there is no shortage of history and great spirits in the place, going back to Woody, and beyond. Upcoming Caroline Doctorow shows include the New Bedford MA Summerfest Sat 7/3 and Sun 7/4. 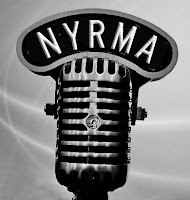 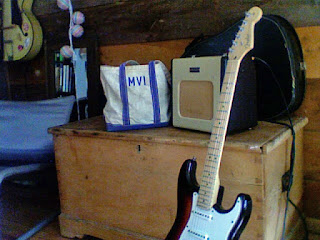 MATTY LIOT and THE BIG UP toil hard finishing up a series of recordings begun at Sonic Youth's studio in Hoboken NJ, now finishing with the Lantern Sound mobile rig on location at the band house. When these recordings are finished, it is hoped that the mobile rig will find a more permanent home ASAP. 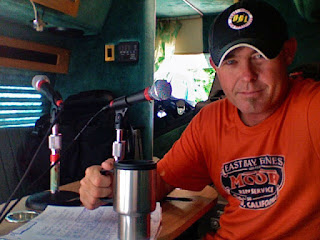 Getting ready to do the radio show in the Songtrailer.
(I think Caroline has the good photo w/ us both.)

THE SONGTRAILS RADIO HOUR is heard on WPKN 89.5 (Bridgeport CT) and hosted by Caroline Doctorow and yours truly, and there are reports that you'll soon be able to catch archived episodes on WEER 88.7 (Montauk NY) on Saturday nights. More info as that develops. The next new episode of the show airs Saturday July 3rd at 7pm Eastern. This show will be available the very next day at the Songtrails Radio Hour Podcast/Blog.


SPECIAL OUTDOOR TREAT FOR NYC FOLKS: I'll be in Bryant Park, playing bass with Libby Johnson on Wednesday July 7th at 5pm in a free open-air show.
Posted by Mick Hargreaves at 3:39 PM