If you're into bass, or even guitar, you'll find this interesting; if not, save yourself now and turn the channel... things are about to get really tedious, boring, and string-centric. MH
During my seasonal systematic cleaning, polishing and setup of my various basses, I decided it was time to get real (and keep it real) about string selection, particularly with respect to what string set would be best for each bass. Take notes, establish benchmarks, that sort of thing. Combining my existing experience with a load of research into availability, reviews, and pricing (I was up until 2am one recent night pecking away on the inter-web), I came up with the following list of instrument / string pairings. This list is of course tailored to me, and it's evolving by nature; your mileage may vary. Feedback (not from the bass amp) is always welcomed.
Dates, where noted, are the last time strings were put on the instrument. Except for the Danelectro tic-tac, all basses are four strings. Like Terry Day's t-shirt says,
"If four strings was enough for Willie Dixon, it's enough for me." 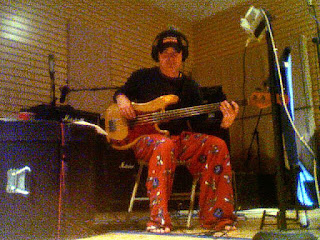 Fender 1966 Precision Bass
(Photo: In-studio pajama overdubs, Libby Johnson "Perfect View" recording sessions.) The grand-daddy of all my basses. Bought in 1993 for (please don't hate me) a measly $675 when I was with The Gripweeds, it's my recording log, and rarely sees the live stage. The butterscotch color is probably some sort of severely-yellowed Fender white. I've swapped out the tuners, knobs, bridge, and pick guard, but kept all the original parts stored away. The pickups and pots are still original. To duplicate the James Jamerson sound as closely as possible, I've been using La Bella 0760M "Deep Talkin'" Flat Wounds  (.52 .073 .095 .110). I don't even remember the last time I changed these puppies; like James did, I'll keep a set of strings on this bass forever. Bring on the funk, please... literally. 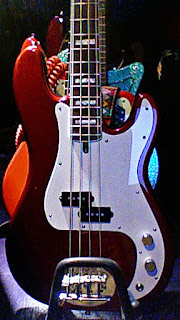 Lakland 2007 Duck Dunn Precision Bass
My main stage bass, a dream to play. Candy-apple red with big fret markers, P Bass body and passive electronics, fast J Bass neck, Lindy Fralin pickups (which they longer come with; Lakland was sold in April 2010 and there's a whole new production workflow and supply, apparently. They now have Hanson pickups). Purchased a couple of years ago on Craigslist. I'm getting tempted to put a replacement tortoise shell pick guard on. Someday I'd like to get a Hip Shot D-Tuner slapped on to this bass, so that would mean a thicker E string, if not a thicker set all together. For now, to duplicate the strings and gauges that came on this bass from the factory, I chose GHS M3050 Precision Flatwound (.45 .65 .85 .105 - 10/5/2010). 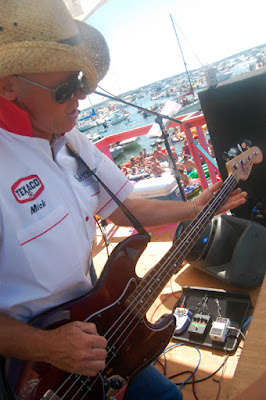 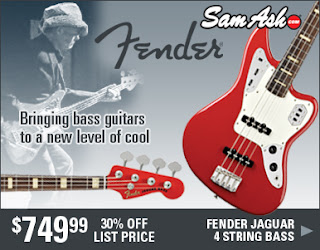 Fender 2006 MIJ Jaguar Bass
It seemed like a good idea at the time; it took modifications to make it work right. J Bass neck and pickup profile. I immediately took it on the road with Matthew Grimm and the Red Smear, where it gave me unending electronic problems, to the degree that after the infamous Dallas TX show, I purchased the aforementioned Jazz bass in Iowa City, mid-tour. Back home, I had the active 9V electronics removed, and there was never a problem again. Only the pickup selector switches, volume and tone knobs remain functional. Because I still want to have one bass with round-wound strings in the arsenal, and I had a couple of sets laying around, I've put on a set of Dean Markley MED 50-105 Medium Gauge Blue Steels. We'll see how that experiment goes. 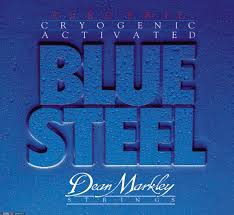 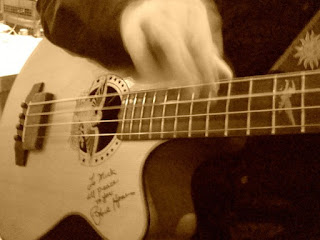 Carlo Robelli Acoustic "Freedom" Bass
Yes, it has an eagle in the soundhole; I had to have Richie Havens sign it. I get a very pleasing "upright" sound from this instrument, especially if foam (or as some players do, a tampon - I have yet to try this) is put under the strings near the bridge. String selection on this one is an ongoing experiment. Right now, to keep tension low I've gone with a set of Fender 9050L Flatwounds, Light gauge (.045 .060 .080 .100). They're a bit bright, so I'm using a cloth or foam mute under the strings. A set of black nylon flat wounds might be really nice on this thing though. 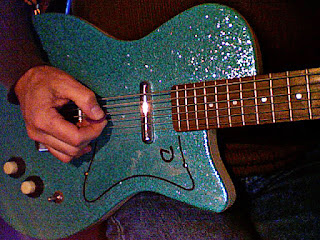 Danelectro 6-String Bass
These Danelectro (Tic Tac) basses are typically strung up (.024, .034, .044, .056, .072 .084), all roundwounds. They're tuned E to E one octave down from a normal guitar, sometimes with the top-note strings tuned to C and F instead of guitar-conventional B and E. I think the set I currently have on mine (another Craigslist buy) is single strings from the same manufacturer cobbled together. It's due for a new set very soon, and it will probably be a custom set once again. Danelectro's custom sets are apparently no longer available. Suggestions?
Some Context: Danelectro baritone guitars are apparently strung up .014 to .068. The standard set of GHS Electric Bass Boomers for Fender VI Bass 6-String (used extensively by the John Lennon and George Harrison in-studio when Paul was on piano) runs .025 to .095; this obviously yielded a much more bass-like tone.

Posted by Mick Hargreaves at 9:23 AM