Thank you.
To the dog owner who corralled their barking hound three songs into my outdoor showcase set at the Montauket Friday evening, 13 May. A dedicated fetcher, he seems like an awesome pooch. Pure Montauk.
To Joe Delia, who then showed up during my set with a BOX OF MILKBONES. Thanks for spearheading the PA system arrangement, and for having me sit in with the Thieves for both our shows together.
To Mike Bifulco, who joined me on electric guitars at the Montauket show.
To the awesome west-facing Montauket.
To the proprietors of Gurney's Inn. Great opening party, very nice staff. Sound treatment in the big room, please?
To performers Urban Sun, Grand Folk Railroad, Joe Delia and the Thieves (of course), the always-awesome Jewlee Trudden, and Marianne Megna's entire crew. Too busy to see many more.
To Anthony Famiglietti of WEHM-FM 92.9 & 96.9FM and Bonnie Grice of WPPB 88.3FM for having me on the air the week before the festival. 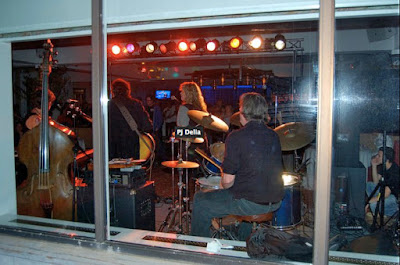 Opening party at Gurney's Inn, Thursday May 12 2011.
Observations.
I took the time to talk to many fans, the organizers, other artists, and anyone else willing to chat, and I can say that the people who came for the music at the Montauk Music Fest universally loved it.
Knowing that performers do not get paid MMF, I was a bit wary about doing it for 2011. I'd been through this in NYC at the CMJ fest, with varying results. If I had a whole band of musicians to pay I might not have played the fest, but after I did a bit of triangulation and research, I tipped in favor of performing as a solo artist.
As a bassist/singer/guitarist/recordist who's performed with many bands in and out of the area over the years, I've embarked on doing solo performances of late, slowly building a band around myself. With some upcoming solo releases in the works, I deemed it important that I get my name out there. Gig opportunities, along with some local radio appearances the week of the fest (thank you, WPPB-FM and WEHM-FM), along with organizers gracious hospitality, also figured in my decision.
One other BIG factor that swayed me: Back in December of 2010, fest organizer Ken trekked to Huntington to see me do a solo set at the New York Roots Music Association's "Holiday Hootenanny". I believe the subject of the music fest was broached at that time, and I remember being impressed that he made the schlepp all the way over there, essentially to invite me to the fest.
The MMF secures "out of town" bands hotel/motel accommodations for the duration of their gigs, which is nice, but that should not be equated with actual payment. It's a consideration, not compensation, balanced by the fact that local acts (such as me, for now at least) aren't saddled with sizable travel time, and fuel / transportation costs.
Thank you to the festival organizers.
You're Ken, Lawrence, along with your respective significant others, and, from the beginning, your small four-person team has built something from absolutely nothing, making it up as you go. You're working insane hours, unpaid, probably with fitful sleeps. The festival is tied in with the Montauk Sun Newspaper, but perhaps because of this, other local print media seem to shy away from covering the fest. (Radio jumps on it, though.) You need to make sure that, right out of the gate, it's a success, on people's radar to extent that they actually show up.
At this point, you might come to the conclusion that, at least to start out, the festival would be a free-admission event, and you won't be able to pay performers. This is where the Montauk Music Fest is at the moment.
It's very important to stress here that the business model of not paying rank-and-rile performers at multi-club citywide "industry" festivals was established long ago at the CMJ (New York City) and South-by-Southwest (Austin, TX) music festivals, and if you've ever attended either event you'd agree that it has been proven to be quite a workable blueprint. Performers are stepping over each other to perform for free at these important events. That's the reality.
In an ideal world, The Montauk Music Festival would eventually be able to attract some national acts by getting sponsorship and underwriting, perhaps charging a modest admission price. The fest could sell three-day, two-day, one-day passes, with free outdoor shows on the town square. As many other festival organizers have done, they would evolve, learn, adjust, and invent.
But starting out a festival in these tight times is an unenviable, wait, let's just call it DOWNRIGHT CRAZY, undertaking, one that can, and often does, mean losing money initially.
So go easy on these guys. Thank them for putting this festival together from scratch. It's about a whole community, not just a community of performers, and most of all, it's about the fans. Without the fans, we are nothing, and connecting with the fans sometimes outweighs the importance of getting paid to perform.

I know that's a hard pill to swallow for some, but for the time being, it's the way things seem to be going.
To the recording studio, James.
For free MP3 downloads, show schedules, and release news, it's still:
mickhargreaves.com
Posted by Mick Hargreaves at 8:36 AM