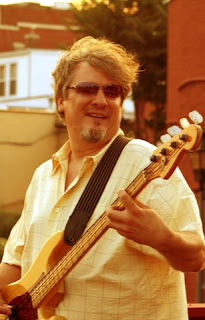 Bassist Don "The Mangler" Mangels has, at various times, surfed in a hurricane, locked eyes with a black bear at 30 yards, performed live music with his father in a dirty bar, lost his car for 2 days, been among the 200 attending  Stevie Ray Vaughn's 1st NY show, driven a Camaro 130 mph on Ocean Parkway, hitched a ride on the outside of a freight train, stuck his head in an actual cannon, stayed awake for 4 days, fallen asleep in the jury box, boogie boarded in a rain-swollen drainage ditch, jumped a Schwinn Sting-Ray over 4 garbage cans, driven a postal jeep on 2 wheels, flown a kite with 2000 ft (10 rolls) of string, broken his ankle on HS graduation night, gotten spit upon by Miles Davis, and once even tapped Buddy Guy on the shoulder during a solo (and lived to tell about it). We liked him the minute we saw his license plate, which is a tribute to the Fender P-Bass, and caught up with him long after the dry cleaners took care of Miles' saliva.

Don, please name some things you like.
Puppies, walks on the beach, and watching Nascar in underwear.

Now identify the exact opposites of those things.
Kittens, running on a rainy parking lot, and watching Harness Racing in a down parka.

What's so great about this music thing? I don't get it.
Money, women, and beer! And, you're correct you won't get any of it.

If you could eat one person from reality TV, who would that be?
I would eat Barry from Storage Wars, just so I could get his super-cool glasses. Then I'd eat Brandi.

Would you rather: Have a car that flies but can only run on apple cores OR Be able to produce cooked frogs legs whenever you want to, up to 20 times per day?
No question about it, I'd want a car that flies, especially after that 2 hour drive to get out here to bum-fuck south fork.

Hey, where'd ya get that?
I've had it since puberty and it's kinda growing on me.

Please detail your most embarrassing memory involving an animal.
In high school I harpooned my biology teacher's pet goldfish. I believe he was 6 years old, the fish I mean. I noticed that when you look thru the corner of the fish tank you could see 2 images of the fish. I took that "frog dissecting pokie" we used in biology lab and harpooned it into the water toward the fish image on the right. I won, fish lost, teacher was pissed.

Would you rather: eBay your groceries for a year OR Have tiny light-sabers for fingernails?
Ebay would suck, I'd be constantly sniped and probably starve to death. Light sabers for fingernails would be so cool and useful. It'd be like Edward Scissorhands but with the ability to turn them on and off when needed.

Please theorize on why manhole covers are round.
It's basic geometry, square or rectangle could fall in when lifted.

What's the favorite "can't do without" instrument you own, and... wanna sell it?
My junk....and NO.

How many gas stations would you say there are in the United States, and how have we become so good at striking oil wherever one is built?
There's actually only about a dozen gas station in the US. The rest are either service stations or minimarts, which always have those clear lens sunglasses that I love so much. There's no way there's an oil well under each one, although now I'm gonna look.

Symmetry: Overrated, or Underrated?
Equally both.

Are you gonna finish that Godzilla movie?
Yes, once I get an Apple computer and some fresh Bob Marley.

If you were a car, what kind of salad dressing would you choose?
Oil and vinegar, I'd be a female car with that not so fresh interior.

Can you describe an atom?
Well, he's tall, plays killer sax, tends to under-dress for shows, likes Ducati Motorcycles, and I think he looks kinda silly in a cowboy hat.

There's no keyboard player in Mick Hargreaves & The King Guys. Why?
Good question, probably because all keyboardists took lessons as children.

How good are you at faking sincerity?
I probably am, but I'm honestly not sure.

Should it be illegal to play harmonica while driving?
With the mouth YES, with fingers holding the harp out the window NO. I wonder if the pitch would go up the faster you drove?

http://mickhargreaves.com
Posted by Mick Hargreaves at 11:49 AM