Herein lies the explanation of what happened to our show in Huntington, NY this past Saturday night.

SPOILER ALERT: There was no show.

There's lots of great music venues left, if you play your cards right, and you're selective. In Huntington NY, however, the pickin's are slim; and we're talking about a town with a LOT of bars. We (Mick Hargreaves and the King Guys) just need one venue in any given town, and we had played at this particular Huntington, NY beer joint once before earlier 2013, on a double-bill with the Long Island Hornets.

Things had gone well enough, and it was a great crowd; we turned the other cheek to all the wide-screen plasma TV's showing "sports-ball" games in the place. We did, however, insist that the one behind the "stage" be turned off though. When I say "stage", I actually mean a corner that has a few extra wall-sockets.

SO... We booked another date for this past Saturday, September 21st 2013. This time the other band on the double-bill was our friends, the Butchers Blind. After the date was booked, I personally turned down other paying work (as a sideman) at a very reputable music club on eastern LI in order to honor this date. Operative word here being... "HONOR". I like to stick to the plan, and keep my word.

Well, things on this date went perfectly wrong, through no fault of either band. Scroll like the wind, and read on. 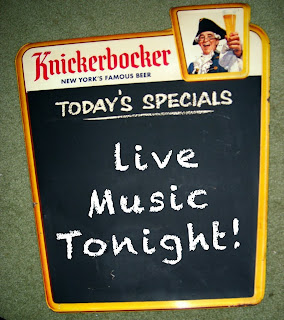 (In fact, it sucks so bad you should pretty much stop booking bands there).

1. The guy who books the bands also runs open mic night, and performs on that night wearing sneakers, shorts, and some sort of sports-ball jersey. I can't remember whether this was worn *over* or *under* a wife-beater tee, but I'm almost sure that was the fashion combo. Don't ask what team the sports-ball jersey was from. No one cares.

2. This guy only books shows via texts, and doesn't answer texts very well. No phone calls, no emails. Oh wait, that last part describes almost EVERY MILLENNIAL IN SOCIETY nowadays. Almost as good as those zombies in the "Walking Dead", but not quite.

3. Drop off posters at the empty (but open) bar one afternoon, get funny looks from staff. Put them up anyway. On the way out the door, one employee confronts me and asks if I work there. Nope, I'm putting up posters. Maybe the fact that I'm carrying a roll of tape... and posters... might be a huge giveaway there?

4. Our drummer walks into the bar with cymbals and a snare drum and gets immediately set upon and harassed by an ogre, who is masquerading as a bartender.

4 (a). Find out later that no one, NO ONE AT ALL... likes this bartender. In fact, the establishment has been having problems with him, and he's been fired several times. Crazy management strategy much?

5. Why is the bartender being extra mean and nasty tonight? Because there's a private party booked into the bar taking up every bit of space, and there's no way they could have booked a band for the same night. Or so he SAYS.

6. The owner is apparently drunk in Miami.

8. No one associated with the bar can explain why the posters announcing this show (that had now been on the wall, in the window and on poles outside for three weeks) didn't set off any alarms that MAYBE there would be a conflict on the night of the show. (Refer to #7 and #6 for possible reasons, and to #3 for evidence that they actually saw me put them up). Also, someone with the band was in the establishment Wednesday night previous and confirmed the show for the umpteenth time.

9. I understand that you, dear readers, are now so astonished that we need to let everyone skip number nine in order to catch our collective breath and make sure that number eight actually happened.... (pause)... Yup, number eight... actally happened. Here comes number ten...

10. The consolation prize offered is for the bands to set up in a corner that isn't even big enough for the The Shmenge Brothers when they're stripped down to a duet. No immediate effort/offer is made by the bar to offer a re-booking date, or to compensate several musicians who traveled from quite a distance afar to work this show.

11 (a). Number ten would actually need to be multiple dates anyway, a regular monthly residency, with a guarantee, free beer for all performers, and an iron-clad performance contract for each date, each with cancellation clauses.

11 (b). We know you're laughing now, and we're happy that we included 11(a) purely for comedy reasons.

12. Scratch all of number eleven anyway. Because of observation #8, we're not sure about the whole literacy thing with regards to contracts. And posters, of course.

13. My cousin packed, packed, PACKED the place with his band last recently, and it was obvious to him by the (lack of) money that was presented to him at the end of the night that someone was certainly skimming at the door.

14. Only now do I remember "Live Music Tonight" scrawled on a sandwich sign chalkboard out on the sidewalk at the previous gig. Too lazy to write something that actually indicates WHO is performing, huh, bar manager guy?

Truth is funnier than fiction. Thanks, bar-that-prompted-this-list, for at least giving us some comedy material. Everyone pretty much knows who you are by now.

BONUS: The messenger-guy that the bar used as a go-between was very nice, and I didn't envy him that evening. Likewise, the doorman there has always been very nice. However, when I asked him how he was doin', he replied:

"Everything sucks, bro. Everything."