Hello everyone. So, stop the presses... I'm MC-ing an Open Mic Night. You read that correctly.

It'll be at the Stephen Talkhouse beginning this Thursday, November 21st beginning at 9pm. Sign-ups start at 8pm and admission is FREE. We'll have a "Closed Microphone" segment at 10pm sharp for about 15 minutes with a weekly featured artist. On December 12, we've got Pete Mancini (Butchers Blind), who will also appear on Bonnie Grice's radio show that very morning on WPPB-FM 88.3 (Southampton NY). 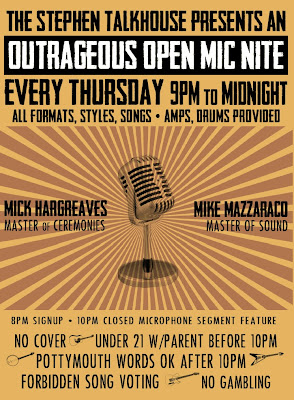 The overriding reason to do this, at least for me, is to get our sorry butts OUT OF THE HOUSE on a Thursday night. I'm sure I speak for many when I say that it's much more interesting to interact with people face-to-face than it is to sit at home pressing another on-screen "like" button associated with something we *wish* we were doing.

The storied history of the Stephen Talkhouse and what has transpired there on many nights... is well known to many. But one particular night, for me, rises above all others. Friday, September 16, 2011 was the night a huge benefit took place, to help me out after I was attacked earlier in the year. A lot of money was raised that night, and at other benefits, and the Stephen Talkhouse kicked in some money over-and-above that as well. I'll never, ever forget that, and the way that made me feel.

So, now I, and we, return for a perhaps more casual, jovial, less solemn, less (for me) nerve-wracking, and hopefully funnier, regular gathering that will take place on six Thursdays over seven weeks beginning November 21st. There's no show on Thanksgiving evening.

Any open mic night that provides a full back line of drums, bass & guitar amps, keyboards and several DI boxes for performers... can be a potential three-ring circus, so Master-Of-Sound Michael Mazzaraco (who floated the idea for a weekly open mic night) and I (who, wisely, or unwisely, has accepted the role of Master-Of-Ceremonies) have cobbled together some guidelines to prevent things from spiraling downward into something that resembles this... 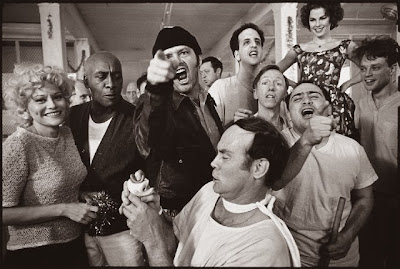 I'll probably play a few numbers right before 9pm so as not to take slots away from folks who've signed up. Then performances will begin at 9pm sharp.

As these things go, adjustments are always a possibility, probably guaranteed, and we reserve the right to tweak the guidlines. Please note that although we've forbidden only one song long to start ("Mustang Sally"), that list will surely get longer as time goes on. We're not sure yet whether songs will be added to that list by a show of hands by the audience, OR solely by edict of Phil and Larry behind the bar. Either way, it WILL be funny.

And, we're being 1000% inclusive. To wit: Accordions are permitted.

Second joke: No "cover" OR "original" songs are permitted. 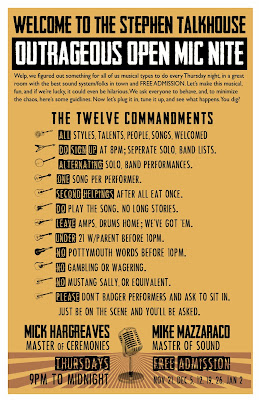 Posted by Mick Hargreaves at 12:19 PM