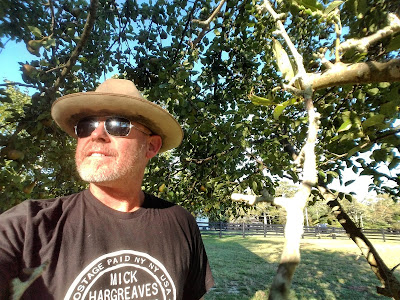 It's time for the pear tree to bear some fruit.

My last show for a while will be on the ARTS STAGE at the Alive After Five (AA5) Street Festival in Patchogue, NY. Other performers that night are the musical Veterans from the Project 9 Line, and the Acoustic Electrix, PLUS poets Donnie Lamon and George Wallace.

I was brutally attacked in an early morning ambush after a gig six years ago today, to the day, July 31, 2011. Considering how bad that was, it's STILL amazing that I'm alive. It probably always will be, I figure.

Since then, in my "comeback period", I've been working really hard focusing on building up the Lantern Sound Recording Rig (LSRR) into a viable, working recording situation, where artists can come and feel 10 times more comfortable and relaxed than any other option they might choose in this area, with me at the helm, obsessing over the goal of making an artist happy. We liken working here to making a record inside an Edward Hopper house that's depicted in a Norman Rockwell painting.

It's working. We have about six records in here that are being worked on simultaneously, by last count. One of them, the one that is at the bottom of the list, is mine. All others get worked on first, before mine. Artist first. Always.

So, in order really knuckle down and clobber away at this exciting load of work, including pushing my record over the finish line, I'm curtailing my own gigs for the time being, at least until this record is done, and I can assemble a band to support it. (Beards will be fine. No mercenaries though; and nearly everyone is a mercenary these days... so we'll see.) Things are so busy, I'll probably have to adopt a "touring" mindset, one where there will be a bunch of MH shows regionally over a finite period of time, after which I will get back into the studio to focus on that work.

Again, here at the LSRR, it's artist first, so I've got to keep the decks clear for that.

You'll be able to stop by and say hello every remaining Thursday this summer, as the LSRR does the sound and staging for the Arts Stage (directed by Dorene Rose) at every AA5 and Alive On 25 (AO25 - Riverhead) festival date right up to August 31st. Plus, you'll see me with the bass on too, performing with artists such as Rob Europe and Bryan Gallo.

For today ONLY, my recording of the song "Crystal Ball" (co-written with Joe Delia) is being brought back as a free download over at Bandcamp. It comes with the story of what happened July 30-31 2011, as a PDF file. Click through here for FREE download options, and we'll see you around campus.