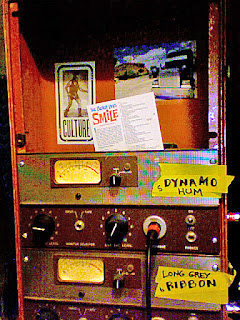 These have already been modded for "modern recording", meaning they now sport a) input transformers so they work with modern low impedance microphones, and b) balanced input/output connections and added unbalanced DI jacks. You can see the added DI jacks in the photo, between the mic / line level knobs.

Not only is the 601 the preamp used by T-Bone Burnett (as part of the complete Ampex 601 mono tape recorder rig) to record John Mellencamp's recent one-microphone outing "No Better Than This"... but these two are also the exact preamps used to record the vocal, acoustic and bass guitars for Mick's "Can't Keep Track of You Blues" (paired with an RCA Velocity Junior Ribbon Mic at Buddy Woodward's Spatula Ranch), AND they'll be all over Mick's upcoming "Redemption Center II" release, currently in the mixing phase.


So far, I love these things for mic'd bass cabinets, DI bass, kick and snare, and any and all guitar amp cabinets. There's definitely a built-in compression characteristic - I've noticed that with level properly set, a mic'd guitar amp will make the needle rise slightly into the red, and there it will pretty much STAY. I rarely turn these up past 2-3 for dynamic mics, 4-5 for ribbons. And as Karen Carpenter used to sing... we've only just begun.

The super-cool website "Fix That Mix" has this to say about the 601:

"The Ampex 601 takes some of the best features from other Ampexes: the microphone input transformer from the 351, the EF86* based mic input section similar to the MX-35 (followed by a 12AY7 and a 12AU7 cathode follower - some of the most favored circuits among tube heads,) and the classic Ampex build quality. With... modifications, they are quiet, gorgeous sounding, versatile, mic/line/instrument preamps that look almost as good as they sound."

Others use phrases such as "slow rise time", "clean and airy", "great presence", and "real nice open tone" to describe the 601's. All I know is these things sound friggin' GREAT.

Find out for yourself: Contact Mick using the usual channels; or, if you know what's good for you, you'll consider seeing Mick & The King Guys when they have their NYC debut at the Rodeo Bar on Saturday April 14th 2012.